This winter we have been privileged to watch a spectacular display of starlings over the town of Castle Douglas in south west Scotland every evening. Thousands of birds mass in the sky to perform the most breath-taking aerial ballet.

The starlings start to gather

It seems starlings do this for several reasons. Grouping together offers safety in numbers as predators such as peregrine falcons are less able to target one bird to grab for dinner in the middle of thousands swooping and swerving. They gather to keep warm at night and they exchange information about good feeding sites.

At some point the decision is made and communicated to the entire murmuration and they swoop down to their chosen roost. It’s like a black waterfall pouring out of the darkening sky. Once settled the racket they make as they chitter chatter amongst themselves is astonishing. 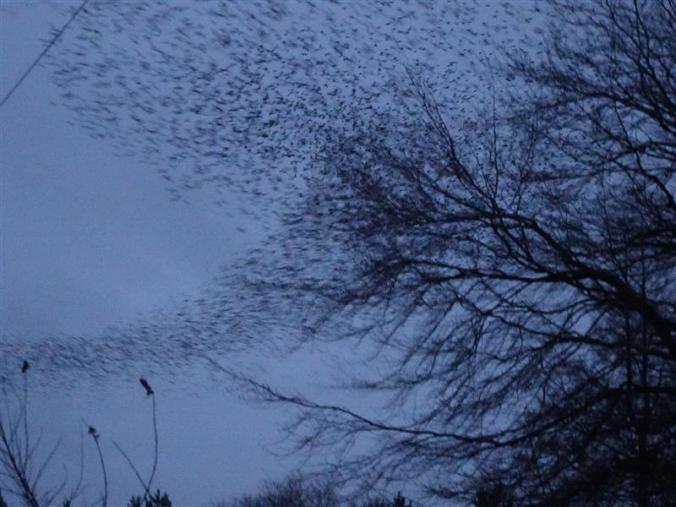 Coming in to roost

What makes them choose a particular place, though, remains a mystery. For years we’ve had a small group which roosts in the monkey puzzle tree in the grounds of the library but we’ve never had such numbers before. For some years, Gretna boasted a large murmuration and last year they were at Kirkcudbright. This year, I’m so delighted it’s our turn – even if my poor car is under their flight path. And, if it’s true a bird pooping on you means good luck then I must be going to be incredibly lucky this year! 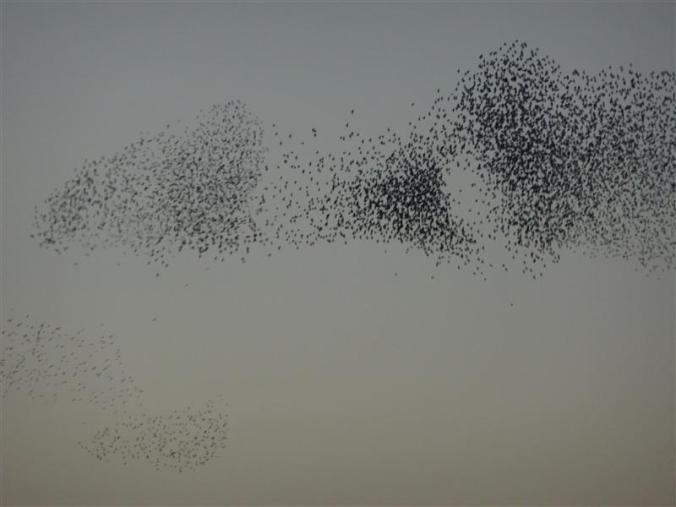 All over the town photographers are wandering about, eyes glued on the swirling mass above. They’ve led us a merry dance, too, changing their roost location several times over the last few weeks – still always within walking distance. Wherever they choose to roost, I’m lucky they gather right outside my study window before they fly homewards for the night.

My friend and collaborator on local history books, wildlife expert and photographer Keith Kirk has taken some stunning photos and videos. This link takes you to his Facebook video page and from there you can find the link to his photos.  He’s a MUCH better photographer than I am!

New Year/New Challenge! I’ve signed up to Sam Ann Elizabeth’s reading challenge ‘When Are You Reading?’ You can find the details here.

Basically, it means reading one book from each of twelve time periods from pre-1300 up to the future. I can see some of the time periods may be a challenge as they are so far out of my usual reading zone but excited to have to try something new. 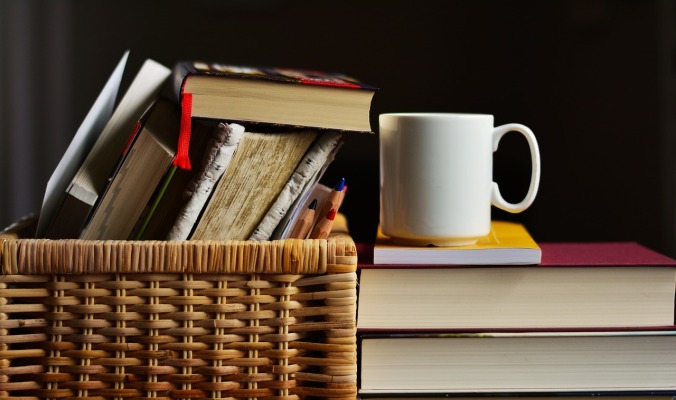 It is up to the participant to determine what year a book belongs in. She suggests choosing a year where the largest part of the action occurs or the most important event.

The first book I’ve read for the challenge is Kate Atkinson’s Transcription, which has a brief beginning and ending in 1981 but the bulk of the story takes place in 1940 and 1950 so it slots very nicely into the 1940-1959 time period. I’m off the starting block!

These are the time periods:

Why not give it a go? At only twelve books through the year it feels like it should be do-able, doesn’t it? Sign up here.

Sally Cronin is continuing her Sunday interview series offering writers a chance to answer questions designed to allow her readers a glimpse into the real you behind the books and blogs.

Happy New Year to everyone!

In a determined effort to walk off the mince pies the DH and I decided on a fairly rigorous (for us) New Year’s Day hill climb. Criffel is one of those hills, practically on the doorstep that you intend to climb and never get round to it. January 1st was a gorgeous, gloriously sunny day here in south west Scotland, we didn’t have anything else which needed to be done so there was no reason not to do it.

At 569m / 1867ft Criffel is by no means the highest of Dumfries and Galloway’s hills, but looks higher because of the way it rises up from the flat coastal around the Solway. It dominates the landscape and is the eighth most prominent hill in southern Scotland.

There’s a car park for walkers at Ardwall Mains, a farm about two miles from New Abbey. Leaving the car park, the route is well signed up a good footpath which climbs up through the trees. It crosses over a forest road continuing upwards, ever upwards with Craigrockall Burn tumbling down on our right.

The view down to Kindar Loch with its islands and crannog, the Solway Firth and across to Cumbria is beautiful but I’m already puffing. Glad to stop for a photo opportunity, it’s  then my camera battery dies and we have to rely on the DH’s phone. When I check my watch and discover we’ve only been walking for about twenty minutes I’m worried. The printout of the route describes this part of the climb as ‘gentle’.

The DH has a much greater lung capacity than I have so he’s not bothered.

At the end of the forestry where a gate heralds the finish of the well-constructed path we’ve been slogging up I insist on stopping for some coffee and a few dried apricots to fortify myself for what’s ahead.

As I sip my coffee I watch people coming down the hill. They look like they’re drunk, staggering and zig-zagging all over the place. Once we go through the gate, I understand. We now have to climb up a very muddy path. No, that’s not true; it’s actually endless bog and heather and it’s a real struggle.

I have to take frequent pauses to admire the view over Loch Kindar which is sparkling in the sun and Estuary beyond. 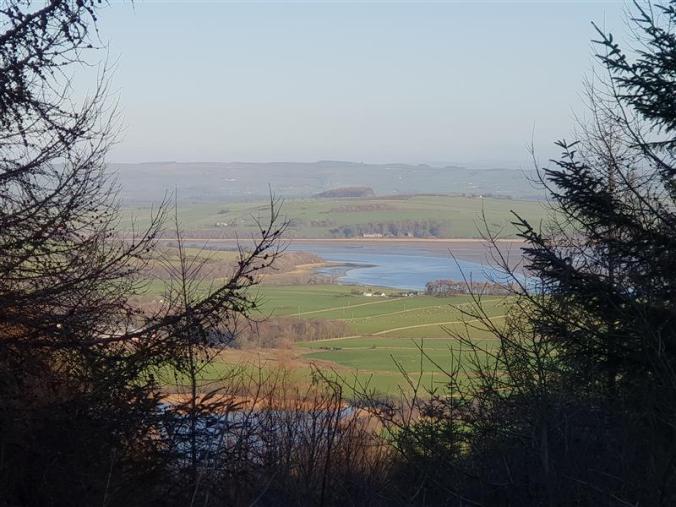 Looking up is not a good idea for the summit remains hidden. ‘Not far now,’ call out people coming back down the slope, looking a lot more cheerful than I do.  When I’ve paused for the twentieth time, the DH says it’s okay if I don’t want to carry on. ‘We can do it another day.’ No chance. I’m going to get there because I am not doing this again.

A couple overtakes us – everyone who started after us overtakes us – and the woman says she’s pretty sure it levels off soon. Says she’ll wave to us if she’s right. I give up watching for her wave and eventually they disappear from view.

Finally, we near the huge summit cairn – known as Douglas’s Cairn. Reputedly, one of the Douglases, Earls of Morton, was buried underneath it but it is more likely to be simply a marker cairn.

Looking back to the cairn from the trig point.

It’s even squelchier between it and the trig point a short distance away. And it’s bitterly cold. Convinced my feet are wet, I remove a boot to discover my socks are bone dry although my feet are numb. 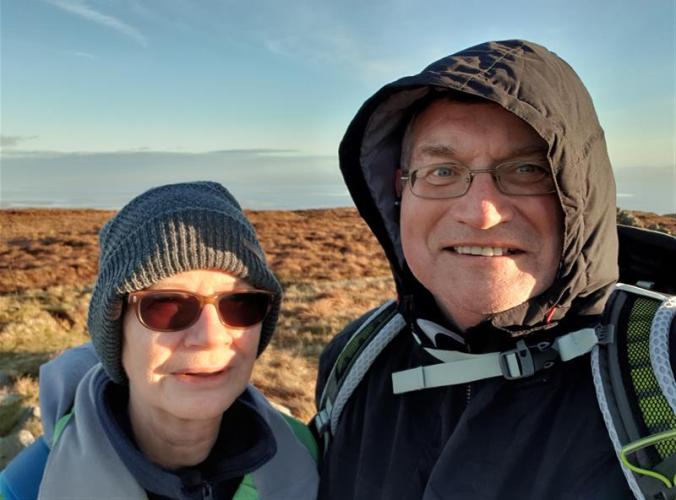 We’re still learning how to take selfies – but getting better.

We have another coffee while we admire the superb views all around: the Solway Firth, river estuaries and the English Lake District, with Skiddaw nodding over at Criffel. It’s too cold to linger and we set off back down. Now, it’s our turn to do the zigzag walk in an attempt to avoid the worst bits of bog.

The DH has had a problem with an ulcer in his ankle and can’t wear his proper walking boots or it opens up again so he is wearing his special walking crocs. These have done sterling service all over the mountains of La Gomera, on long country walks here but Riffle’s mud proved too much. His feet suddenly slid from under him and down he went – not once, not twice but, ‘I’m trying to keep it so single figures,’ he says as he goes down for the ninth time.

Unfortunately, the tenth time he goes down, one of his crocs vanishes into the bog. It disappears without a trace. Until then, I’d been laughing and wishing my camera battery hadn’t died but the thought of having to go to the car, fetch fresh footwear and climb back up, stopped that. Using his walking poles – both by now quite bent – he fished around in the various holes the croc might have gone down. It would be a great place to dispose of a body – though getting it up there would be difficult. I suppose you’d have to commit the murder in situ. By some miracle he found the croc. 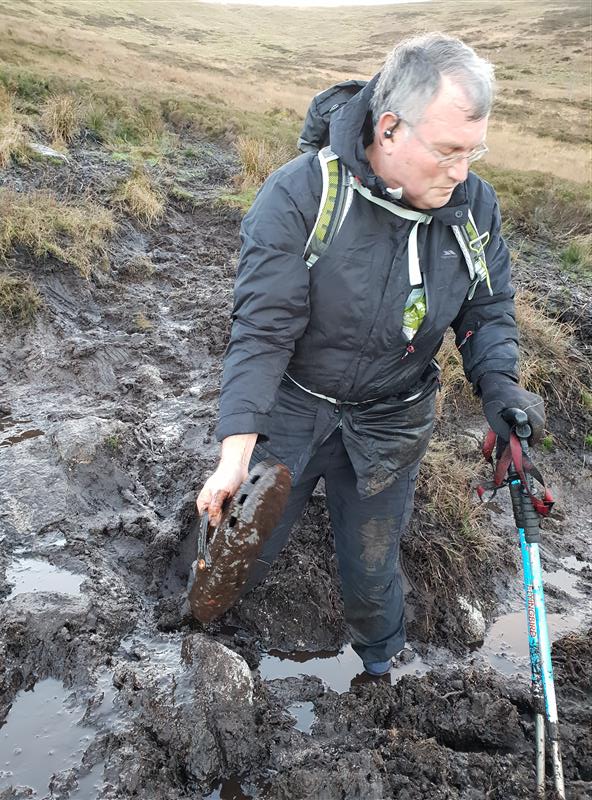 Once on the dry path again, his crocs and socks washed in the burn, we made good progress back to the car park. I’m glad I can say I have climbed Criffel but I don’t intend to do it again any time soon. I reckon I walked off both the mince pies and the Christmas pudding!