The first week of November was almost over. It had become extremely cold. The sun, though still shining brightly in a deep blue sky, barely thawed the iced puddles in the compound, before they again froze hard. My daily activities were interspersed by increasingly frequent trips to the latrine – some hundred metres from the compound – as I tried to combat the cold with copious quantities of hot tea.  Once I heard Qurban call to me through the dividing wall between the two loos, ‘Would you like your desk and chair brought out here? It would save you an awful lot of walking.’ 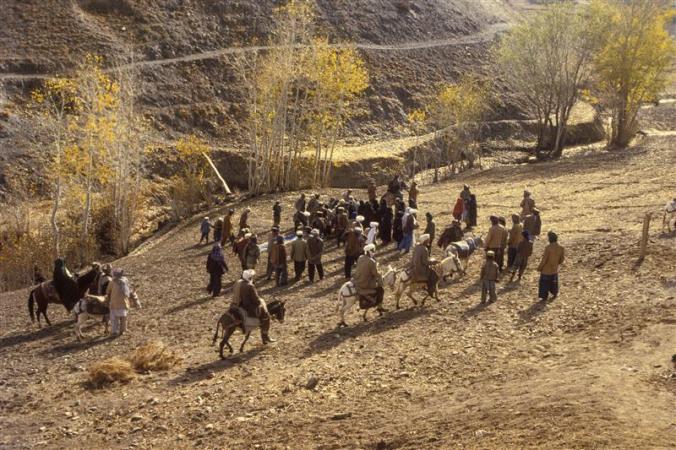 Escorting the bride to her new home. 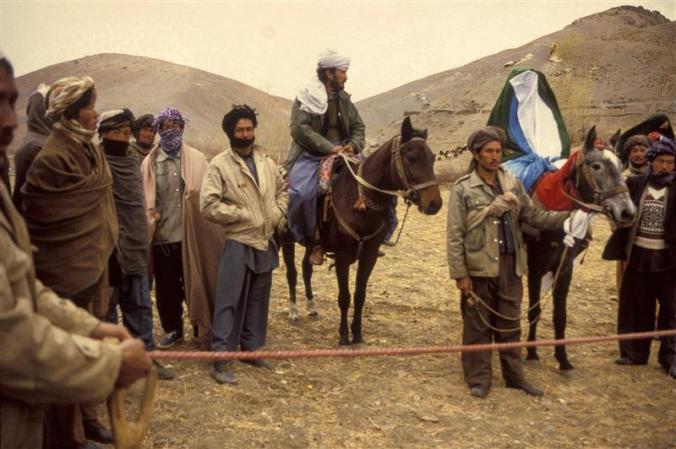 The bride is stopped at a barrier until a ‘toll’ is paid.

I’d finished the stock taking and was now spending most mornings working on reports, and in the afternoons I taught English to Qurban’s young brother, Bashir, and Khadeem, the cook’s assistant. Khadeem had leprosy, fortunately discovered in the early stages so he would have no deformities and would soon finish his treatment. His family were poor; his father a landless labourer. Qurban, rather than provide hand-outs from the social budget, had employed Khadeem to work part time in the kitchen. His salary, though small, helped his family survive and Qurban had also enrolled him in the local school.

Both boys were enthusiastic students but Bashir was brighter and quicker to learn. Khadeem, although he tried very hard, could never quite catch up, and sometimes Bashir teased him over his mistakes. After a while a third student surreptitiously joined us, sitting hidden in a corner, listening intently.

Zahir, a leprosy patient, not yet sixteen years old, had many deformities.  Not only had he lost his eyebrows, his nose was completely destroyed; only two holes appeared in the middle of his face. His mouth was contorted, and a hole in his palate created a speech defect which made understanding what he said difficult. He always wore a turban, its end pulled tightly across his face to hide his nose and mouth. When eating, he sat as far away from others as possible and, if strangers were present, he didn’t eat at all. His hands and feet were also deformed, the fingers and toes foreshortened. He was staying in the clinic until Jon arrived then we would him with us to Pakistan for reconstructive surgery.

Finally he plucked up the courage to ask if I would give him lessons. After Bashir and Khadeem’s class was over I spent another half hour with Zahir, who proved to be a willing pupil and quick learner. He had already absorbed words and phrases through listening to the boys, and before long had almost caught up with Khadeem.

In the evenings, after dinner and lessons were over, we often played cards. This helped to round out my vocabulary, which still leaned heavily towards things medical, though not my card playing skills. I frequently felt moved to apologise profusely to whoever had been unlucky enough to partner me. The problem was caused only partly by my ineptitude.  The biggest problem lay in my inability to cheat. The others, Aziz and Ibrahim in particular, gave the most obvious signals to each other, indicating which suit to play, or that they had just played their last trump card.  Even when I had learned the various signals – the slamming down with force of a card, the eyebrow scratching and ear tugging – I was quite unable to put them into practise myself, to the utter despair of my partner.

As the weather became ever colder, a heater was installed in my tiny room, reducing even further what little space there had been. The mice, I am sure were as grateful as I, for the warmth. The stove was a frightening contraption with a metal box, divided into two compartments. A tap opened to allow kerosene to drip from the tank to the second box and, to get it going I had to throw a lit match inside to ignite the fuel. Often the match fizzled out before anything happened and the temptation to peer inside before trying again was strong, until Ibrahim warned me people had been severely burned doing the same thing when the kerosene suddenly ignited with a whoosh of flames. By bedtime the room was beautifully warm but, apart from removing my socks I slept fully clothed, thermal underwear included, because within minutes of turning off the heater, a bitter chill invaded the room.

I began to worry about the snow arriving before Jon did, leaving me stranded in Lal for the winter. I didn’t think I could cope for long with the temperatures. Besides, I was running out of toilet paper, a commodity not stocked in the bazaar. Jon was already several days late and once the snow came I would be well and truly stuck. Ibrahim, Rahimy and the others were quite pleased with this thought, planning all kinds of teaching programmes, convinced they would be speaking fluent English by spring time. They seemed hurt by my lack of enthusiasm about the prospect of five, snowbound months in the clinic.

Every night, I’d retire to my room with only the mice for company trying to feel positive and hopeful. Maybe tomorrow, Jon would arrive? Hope isn’t all it’s cracked up to be, especially when it isn’t realised and I’d be disappointed all over again at Jon’s non-arrival by the following afternoon.

I calculated by which date I must leave if I was to reach Bamiyan and find transport south to Jaghoray. If I did not meet Jon en route at least Hussain in Jaghoray would be able to find a way for me to get back to Pakistan. Rahimy was to go to Karachi for a training course so he could accompany me – Ibrahim also offered to come as a guide, as did Aziz.  Qurban was horrified to discover half his team was preparing to leave in a week or so, especially as he knew they would be unlikely to return before late spring. I promised I would only take Rahimy.

Blue skies and mountains – landscape to fall in love with