It was bitterly cold at four o’clock in the morning and I really hated leaving my snug, downy bed for the trudge across frozen fields to a frozen truck. Paying a quick call behind a tree before we departed, I shuddered at the thought of how it must be to live here in the middle of winter, the snow thick on the ground for months on end. In an attempt to defog the windscreen, the driver drove with his window wide open. Sitting immediately behind him, I felt the full force of the icy air blasting in my face.

At the prayer stop I shivered, watching the men washing in icy water from a stream.  Khudadad didn’t join them. It certainly woke them up and they returned to the truck, talking and laughing together, although for the most part they ignored us. The breakfast stop was at a small chaikhana where Khudadad insisted that I sit on a particular piece of floor space. This was almost entirely taken up by the driver, who reluctantly shuffled sideways to allow me to enjoy the glorious warmth generated by an underground central heating system. Hot air from a fire is forced through tunnels under the floor. I understood the driver’s reluctance to give up even a few inches of blissful heat.

Breakfast was tea and bread with individual pots of butter. The butter was so hard I couldn’t see how I was to spread it. The driver solved the problem by sprinkling his butter liberally with sugar, then eating it with a spoon. I followed suit.

The sun finally warmed the cab to a tolerable degree. The road wound up mountain after mountain. At the top of each pass the conductor leapt out to cover the bonnet with a large blanket. This, Khudadad explained, was to prevent the engine, which had become dangerously over heated on its laborious struggle uphill, from cooling down too quickly on the downward slope. At the bottom of the pass the blanket would be removed until the top of the next one was reached.  On the steepest part of the climb all the passengers sitting amongst the apples in the back of the truck got out to walk, to lessen the load, as the ancient vehicle groaned its way to the summit. These mountains were higher than those I had seen in Jaghoray, rising to a height of over three thousand metres.

When Khudadad informed me that we were nearing the top of the highest pass, I looked out and saw the road snake away behind us with one or two toy town vehicles far, far below. On the descent, two bends from the top, the driver misjudged the turn and brought the truck to a halt, its front wheels teetering on the edge of the drop.

Everyone, including Khudadad, leapt out to help the conductor heave boulders in front of the back wheels to prevent the truck from taking a nose dive down the precipice.  Outside, sounds of shovelling and digging were accompanied by a great deal of shouting but inside the cab with the entire bench to myself, I enjoyed the luxury of stretching full length. I closed my eyes. In a sleepy haze I heard someone knock on the window, a voice declaring, ‘Khau raft– She’s asleep!’  Khudadad’s voice in my ear woke me. He was shouting, ‘You must get out!  Get down! The driver is going to reverse the truck. Get out!’

‘Why can’t he reverse the truck with me in it?  Does my weight make any difference?’

Khudadad shook his head in exasperation. ‘It’s dangerous. You have to get out, now!’

Grumbling about having my nap disturbed I clambered out joining joined the cluster of people gathered on the steep mountain slope. We watched the driver reverse the truck back on to the road. ‘See.’ I beamed at Khudadad, ‘I knew he could do it. You have no faith, that’s your trouble, no faith at all.’  I took my place again on my allotted twelve inches of seat.

‘Were you not afraid?’

‘No, he is a good driver; he knew what he was doing. And the conductor had put half a mountain in front of the wheels – the truck couldn’t possibly have fallen over.’ I didn’t admit that until I had actually seen the drop over which we teetered – once forced out of the truck – I had been unaware of the danger.

The driver demanded a translation and was obviously delighted at my praise of his driving – he smiled at me for the first time since we had met.

The scenery changed as we left the high mountain passes, driving now through the flat valley of Kirman with rugged rocky outcrops on either side of us. Few vehicles were on the road but we were clearly in horse country. Many riders had to rein in their mounts as we passed. Frightened by the noise of the truck, the horses stamped their hooves and tossed their heads, obviously longing to flee from the terrifying monster approaching them. Again the landscape altered and we were in the midst of great, rounded, sweeping mountain vistas, vastly different from the more rocky and rugged mountains of Jaghoray. 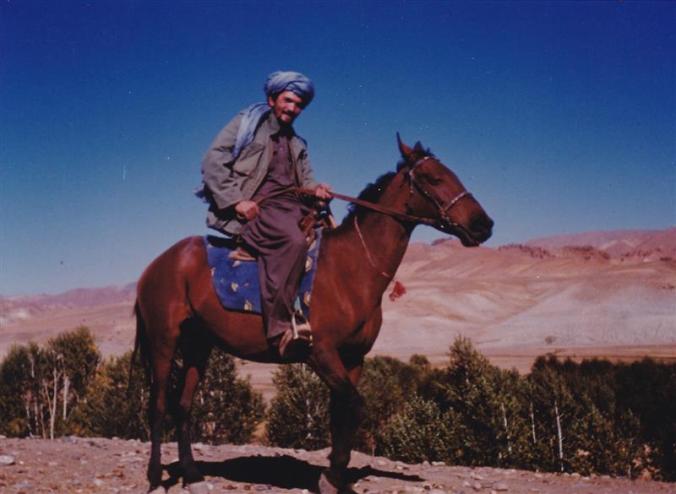 Khudadad pointed, ‘On top of that hill, on the other side of the river, is the Lal clinic.’

By the time the truck pulled up a welcoming committee had formed. Jumping from the cab I scanned the blur of faces until I caught sight of Qurban’s familiar features as he pushed through the crowd to greet us. Khudadad received a huge hug and kisses on both cheeks, I got a brief handshake and we were swept off to have tea with my “brother” and his colleagues. 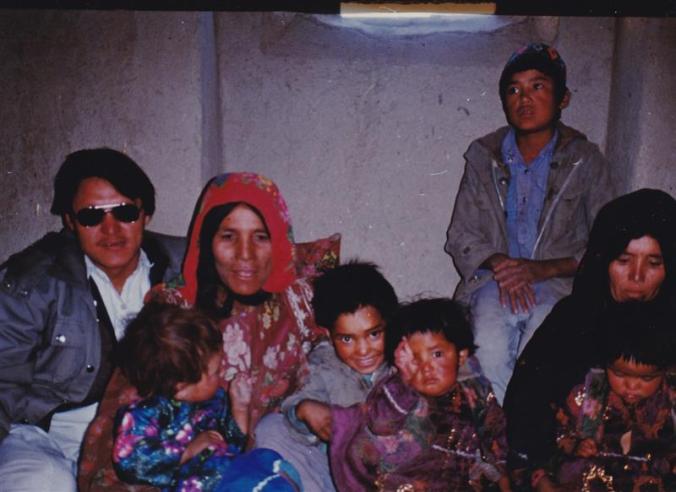 Qurban and his mother and siblings

Introductions were made to a host of staff, patients and curious visitors but I knew it would be days before I succeeded in sorting out who was who.