Khudadad confirmed we were now travelling through a Harakat controlled area so Sayed was on his own turf and became more relaxed and good humoured. 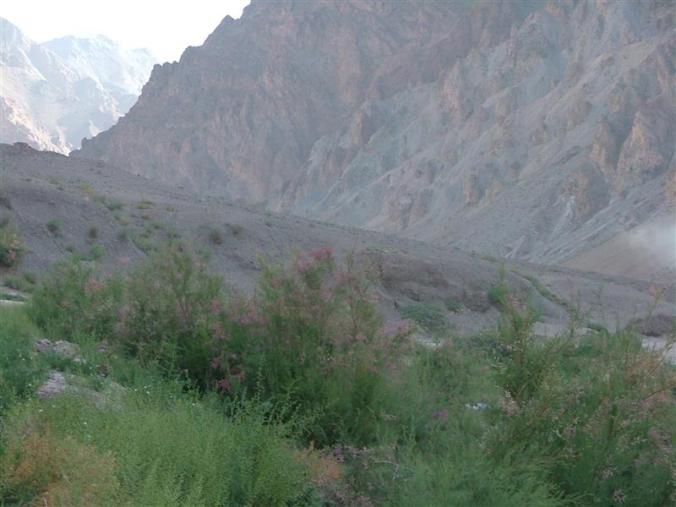 From surly driver he now became a tourist guide, stopping to show me a hot spring. The water, which bubbled from the spring then into a large natural pool, was remarkably warm, making me long to soak in a hot bath. Sayed scooped some water in his hand and put it to his lips, urging me to do likewise. There was a burst of laughter from everyone when I spat out the foul tasting liquid. It may well have been a cure-all for all kinds of health problems, but it would have required a life threatening condition to make me swallow the stuff voluntarily. 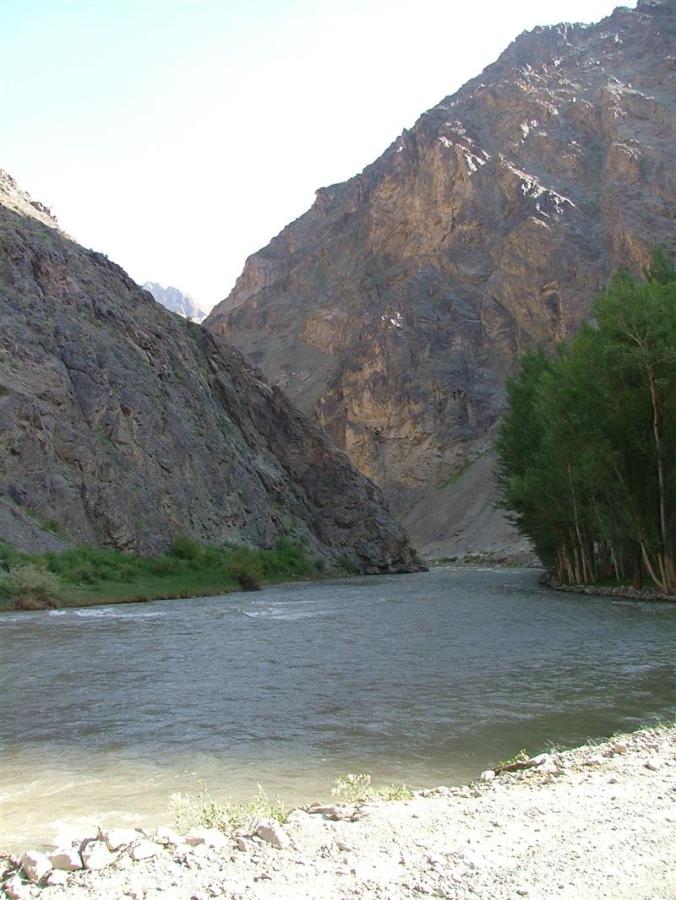 At one point we travelled through an area where it looked as though there had been a light snowfall. Sayed waved an arm expansively at the landscape and announced, with great authority, ‘Milk!’ Astonishment silenced me while the boys in the front, for the first time indicating they understood some English, exploded into loud gales of laughter. Sayed bellowed at them and they stifled their mirth, although their shoulders still shook with suppressed laughter. Solemnly, Sayed, turning right round to face me – I so wished he wouldn’t do that – asked, ‘What do I mean?’

‘I think you mean salt.’ I replied, equally solemnly. For a moment there was silence as Sayed assimilated this information. Then he too broke into loud laughter – which set his companions off again. Surprised by his readiness to enjoy a joke against himself, I decided I rather liked him after all.

The landscape became ever more rugged and spectacular. The mountains on our left rose sheer, from the level of the track, which was liberally littered with boulders and rocks that had come crashing down the mountainside. On our right a river fought its way over and around even more gigantic rocks in great swirls and eddies and miniature waterfalls. We climbed yet another steep pass with an awe-inspiring drop of thousands of feet.

I marvelled at the magnificence of the landscape and I also thought about the fact I was here, travelling through central Afghanistan in a truck full of strangers. Not another person in the world knew where I was. It could have been a scary realisation but instead I experienced a bubble of pure giddy happiness. I knew I was safe, protected by these people whose language I barely spoke and felt so privileged to be here. I grinned at Khudadad, who grinned back.

Coming down the pass into the valley the mountains changed from grey rock to red sandstone, honeycombed with caves. Suddenly, before us was the great mountain fortress which once had guarded the entrance to the city of Bamiyan.  Shahr-i-Zohuk, glowing a brilliant red in the late afternoon sun, was so reminiscent of pictures in childhood fairy stories – magic castles with crumbling towers and ramparts – that I would not have been surprised to hear it was inhabited by giants.

In 1221 the fortress withstood an attack by Genghis Khan’s army, during which his grandson had been killed. Genghis Khan had taken swift revenge. Not only did he destroy the fortress, but the whole of the Bamiyan valley. Sayed told me that in days gone by many tourists had visited Shahr-i-Zohuk. Now, it was the home of a small political party, Mustazifeen.  I had occasionally heard about this group which, although small, was very progressive, its few hundred members reputedly highly educated and supportive of women’s rights. It had established two small field clinics, one in nearby Sheshpul, and the other on the outskirts of Bamiyan.

Soon after passing the fortress Sayed gave the order to halt for the night in a little bazaar, whose only street was already full of parked trucks. Khudadad and I were shown to an enormous room, which could have slept twenty travellers. Here we ate in solitary splendour before Sayed joined us later, for tea.

In his own area and almost at journey’s end he was now relaxed and charming. He’d been a teacher in Kabul, in pre-Soviet days and was actively involved in the village schools in Sheikh Ali. He had been instrumental in ensuring girls also attended school, believing education was a right for everyone. My respect for him grew. He was a man who truly tried to live his life according to the teachings of Islam. He had no time for the illiterate fanatics, whose main aim seemed to be the exclusion of women from all areas of life outside the four walls of their husbands’ homes. He had not wanted to live under communist rule, fearing they would try to eradicate Islam – but nor did he want the end result of the jihad to be a return to the dark ages.

When he rose to leave us, I asked what time we would start in the morning. He looked faintly surprised.  ‘Four o’clock.’  He left the “of course” hanging, unspoken, in the air before asking, ‘Is that a problem?’ The eyebrows were beginning to pull together.

‘No, no problem if I can be wakened a few minutes earlier. I have to go outside before we leave. This morning was a bit difficult for me.’

His brow cleared instantly and he grinned, ‘All right, quarter to four.’

At precisely 3.45 am, someone knocked on our door giving Khudadad ample time to roll our sleeping bags and march me across a field, through a wood and over a stream to a spot he deemed suitable. 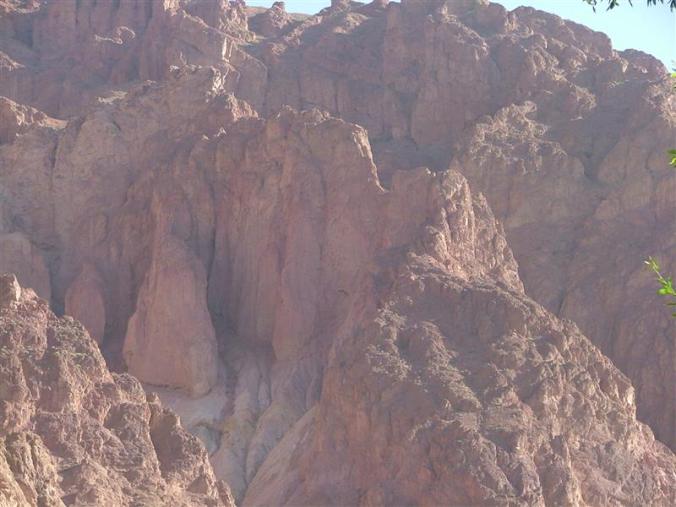 Shortly after it became light there was loud cheering when the crew spotted a fox amongst the rocks. To see a fox while travelling is supposed to ensure the success of the journey. This fact did not prevent Sayed grabbing a Kalashnikov, leaping from the truck and trying to shoot our good omen. I was glad he missed. Rabbits, apparently, are unlucky omens on a journey.

At the foot of a mountain, Sayed stopped the truck. He waved vaguely at a point about half way up. ‘There is Hassan’s house.’  Despite the training I had been receiving on Khudadad’s route marches I felt that mountaineering was quite a different matter. When the boys carrying my boxes overtook me as I gasped and wheezed upwards, I vowed never to touch another cigarette. 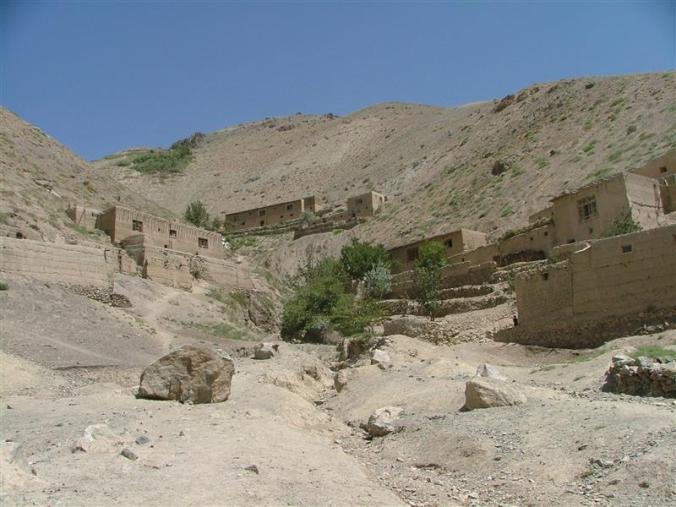