Now we were living on the building site work on the new clinic was speeding up and patients seemed unconcerned about the makeshift consulting room. I still spent part of the day writing out case notes and prescriptions. It was good practice for my language skills and could listen to the gossip – even if I did still need Hussain to translate much of it.

Much of the talk was about the fighting which had recently taken place. From what people were saying it had been more than the usual inter-party skirmish and several days of heavy fighting had resulted in casualties, both dead and injured, on both sides.

We decided to visit the Qolijou hospital.

Qolijou Hospital from the mountain behind. Built at a time Soviet air strikes were a possibility, it’s well camouflaged

The grounds were swarming with mujahideen and a weary Rosanna was in the outpatient department.

A group of mujahideen posing for their photo – they don’t usually point their guns at each other!

She and the translators had been kept busy patching up the wounded. The stranger with her introduced himself as the “prisoner doctor”. He was an Egyptian surgeon, brought to the hospital to operate on one of Nasre’s men, critically injured in the fighting. I had heard of four foreigners who the Nasre Party had kidnapped a year earlier. They had been sent by an Islamic Arabic organisation to work on a programme it was funding in a Pushtoon area.

The ward in the hospital

En route they, three doctors and a teacher had been taken hostage. No one seemed to say with certainty what Nasre hoped to gain by this, nor even if negotiations were taking place. Some said Nasre wanted money, others believed the Party was demanding the organisation should build and supply a hospital for Nasre in Hazara Jat. Until meeting the Egyptian doctor I’d never known whether to believe the story or not.

What can happen if picking up a landmine. This lad lost his sight and a hand.

We went to the staff room for tea and he was allowed to speak with us in English (there were enough Nasre spies amongst the Translators to report back if any attempt was made to pass on messages to the outside world). ‘Mostly our days are spent in a mountain cave, hobbled by leg chains so we don’t try to escape,’ he told us. ‘They took our watches and radios. Otherwise, we are well enough treated.’ 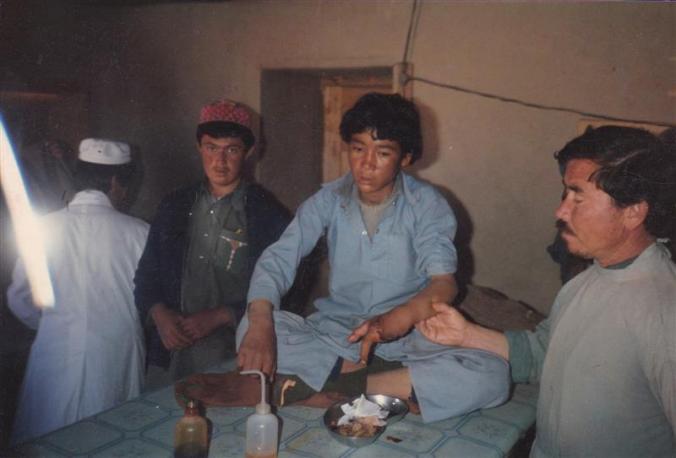 A bit luckier, only part of his hand gone after playing with a bomb

I’d hear one of the men had tried to escape and been shot but didn’t like to ask. The hostages had no idea if negotiations were taking place or what their fate might be, and that, along with their enforced inactivity, was the most difficult thing to bear. ‘We would be happy to use our skills but are not allowed. Only when mujahideen were in need of treatment are we asked for our medical knowledge.’

Following this last battle one seriously injured mujahid was brought to the surgeon who explained he could do nothing in the cave, the man required urgent surgery. Nasre commanders decided to bring patient and doctor, along with what looked like half their fighting force to guard the prisoner, to Qolijou where the necessary operation had been carried out. The surgeon was being allowed to remain twenty four hours in the hospital to care for the patient during the intensive, post- operative phase, and then he was to be returned to his mountain prison. ‘I hope,’ he added, ‘they will bring me back after ten days to reverse the colostomy. In the meantime, I shall try to convince Nasre to allow me, and my colleagues, to work here more often. We could do many surgical procedures, and teach the translators how to carry out the more simple operations. So much could be done for the people.’

Unfortunately, the patient died less than a week later so, sadly, the “prisoner doctor” never returned to Qolijou. The hostages were, I heard, finally released, after about two years in captivity. 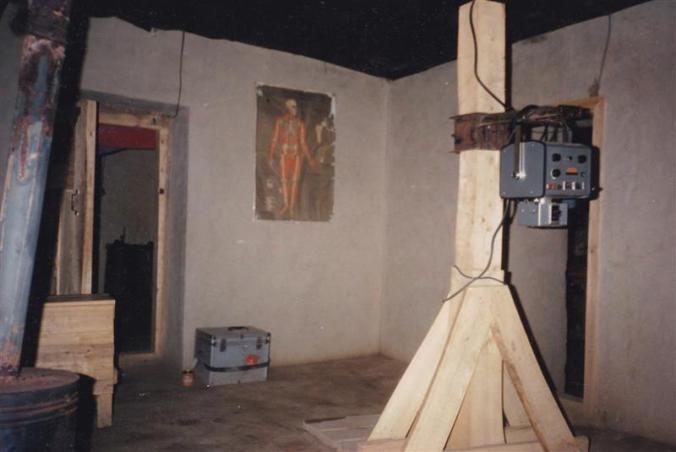 I wish I’d known the outcome sooner. It may have had me less anxious when my husband, Jon, the programme co-ordinator was kidnapped in Jaghoray a couple of years later. I was six months pregnant in Quetta, Pakistan when I received the news. As I was thirty-six and considered rather old to be having a first baby – elderly primagravida, as they put it – it had been agreed (reluctantly in my case) I shouldn’t accompany him on a tour of the clinics in case anything happened. As it was I had no idea if they would demand money, keep him for months or years, or shoot him. He did get back to Pakistan before the birth of our son – but that’s a story for another time.