Although Hussain didn’t encourage house visits he could never bring himself to refuse, even though experience was teaching him the messenger’s ‘emergency’ was probably nothing worse than an indigestion attack. But there was always the fear that perhaps, this time, it really was a crisis.

Shortly before dinner, one evening, a man arrived at the clinic to say that his wife was in labour and the ‘baby did not want to come out’. This threw us both into a panic. When visiting Rosanna, I had examined quite a number of women in various stages of pregnancy, but never had anything to do with actually delivering a baby. Before hurrying after the expectant father, we thumbed through the obstetrics books, trying to memorise relevant chapters.

When we were ushered into the house, none of the three women in the room looked pregnant, and for a brief, wonderful moment I thought the baby had been born. Instead, I was ushered behind a curtain and there lay our patient, looking a lot more calm and in control than either of us. I examined her, calling through the curtain to Hussain that as far as I could tell the baby was the right way round and the head was well down. ‘Ask how many babies she’s had.’

Hussain translated the question and the woman, smilingly held up three fingers. ‘Well, ask what problems she had with the other deliveries.’

Back came the reply, ‘No problems and all are alive and healthy.’ Mum-to-be smiled complacently. A strong contraction came and went. She nodded encouragingly at me.

‘What’s different about this time from the other times?  Why does she feel that the baby won’t come out?’ I asked, instinctively holding the woman’s hand as another contraction began.

There was a longer discussion on Hussain’s side of the curtain then he called, ‘You can come out now.’ As I emerged from behind the curtain he continued, ‘The woman says this time is like all the rest only her husband thought that as there is now a doctor in the village he should call us. We don’t need to stay, the women will help her and we are only minutes away if they do have a problem.’

I didn’t feel I wanted to be only minutes away from a delivery problem. Hussain glanced at me. ‘If I had a vehicle then we could take her to Qolijou,’ he said. I had to agree. Back at the clinic we resumed our study of the obstetrics book. Less than hour later the husband re-appeared to tell us that a healthy son had been born and both baby and mother were fine.  Hussain and I whooped with relief that we were not going to have to practise our non-existent midwifery skills after all.

Soon after this episode I did get a chance to participate at a delivery, fortunately under Rosanna’s experienced supervision. I’d gone to spend a couple of hours at Qolijou while Hussain attended to some work in the bazaar. ‘Come on,’ she said when I arrived. ‘You’re going to see a baby born this afternoon.’ She was just about to examine the very young woman who had been brought in early in the morning. It was her first baby and the girl looked petrified. Her contractions had begun the previous evening but when, mid-morning, they had stopped the family decided to hire a jeep and bring her to Qolijou. Rosanna had started a drip to induce labour again but the contractions were still very weak and infrequent. ‘It’s going to be some time yet,’ she said.

A trip in this kind of jeep on these roads was almost guaranteed to kick start a labour!

Suggesting the family take the girl for a drive in the jeep she added to me, ‘Driving for half an hour on these roads should get things going nicely.’ Sure enough, when the little group – panic stricken wife, bemused husband, mother-in-law and confused looking aunt – returned the contractions were stronger and more frequent.

Although she had delivered countless babies Rosanna admitted she was slightly worried about this one. I found her in the delivery room, sitting on the floor, poring over her own obstetrics book. The husband was becoming increasingly nervous, making moves towards the door, but Rosanna encouraged him to make himself useful by gently massaging his wife.  Normally the husband is nowhere around for the delivery of an Afghan baby and the two women attendants at first looked shocked, then amused.

Hussain arrived to collect me but there was no way I was going anywhere until the baby arrived. He went off to take a nap.

It grew dark and lamps were lit. When Rosanna next examined the girl she said triumphantly to the father-to-be, ‘Your baby is on the way. Look, you can see the head – so much hair!  Now, you help your wife to push, encourage her.’

She turned to me. ‘When the baby arrives I’ll give it to you, don’t let the women get hold of it until I have finished. I’ll tell you how to tie the cord.’

As the woman pushed to bring her baby into the world Rosanna was there with her, pushing with all her might, puffing and blowing and panting until I began wondering which one of them would deliver first. Suddenly, the baby was there, yelling a protest at its arrival.   Rosanna told me how to tie the cord – giving me the chance to feel that I was actually doing something useful. As I tended to the baby girl, so beautiful but so slippery, I was overcome by awe at the miracle of new life coming into the world.

The father was totally bowled over by it all, the only father in Jaghoray if not all of Hazara Jat who had actually witnessed the birth of his child.

Only the mother seemed totally disinterested and we were afraid that she wasn’t happy because her baby was a girl and not a boy. Rosanna questioned the husband about this but after he had spoken lovingly to his young wife we saw her smile and he said, ‘O khush ast lekin kheley khasta shud – She is happy, but very tired.’ When the baby had been cleaned she was taken over by the two older women, impatient for their turn to participate and they expertly swaddled the child, binding her with a band of beautifully embroidered cloth.

The beaming father took his baby in his arms and invited Rosanna to choose a name and, after some thought, she decided on Gulzeba, meaning Beautiful Flower.

The only time the father lost his composure was when, the afterbirth having come away cleanly, Rosanna began to stitch up a small tear. He spoke excitedly to Iqbal who translated, ‘He is afraid that if you sew her up they will have difficulties in the future.’ When Rosanna explained what she was doing, promising that this was not a new form of family planning technique he relaxed again, looking rather sheepish. Rosanna and I returned to her room where we celebrated with a pot of tea and a biscuit.

On the way back to our clinic, I gave Hussain a graphic account of the birth to which he replied, ‘So now you can deliver all the babies in the village.’ 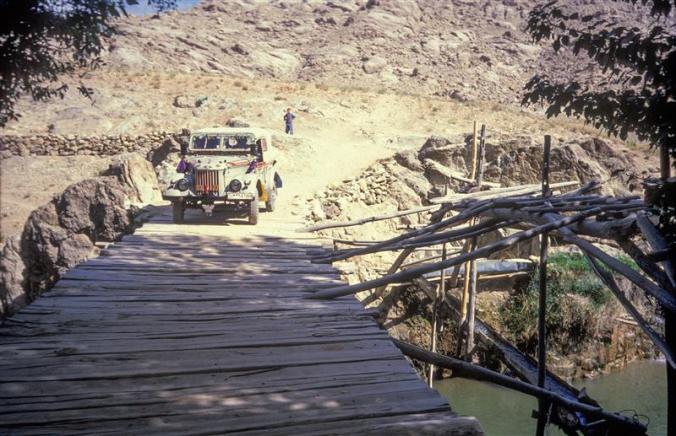 The bridge of terror from a different angle