The bazaar held an endless fascination for me, although the attention my presence attracted embarrassed Hussain horribly.  He hated to see men staring at me. ‘’Mum, pull your chaddar round a bit more, those men are looking.’  With my chaddar pulled down to my eyes and up to my nose I would end up unable to see much more than the road in front of me. As I went about my shopping Hussain would accompany me, his face becoming more and more thunderous as a procession of curious onlookers formed, trooping from shop to shop behind us.

A typical bazaar – though rather quieter than usual.

Tiny shops lined both sides of the street. Some were of traditional mud and wood construction but others were large transport containers.  In the shop where I purchased sweets there was only about a yard of standing room. The rest of the floor was taken up by displays of sweets from Pakistan (these were an assortment of caramels and sherbet or chocolate filled boiled sweets, far superior and far more expensive than the plain, Afghan made sweets which came with tea), sacks of walnuts, almonds, dried apricots and sultanas from Jaghoray’s orchards, and cartons of cigarettes. These were mostly Japanese, under licence to the Afghan Government – Seven Stars, Peace – while were rip offs of branded names.

Other shops sold cloth, their bolts of bright materials adding splashes of colour to the otherwise rather drab, muddy shades of the bazaar. Even the cloth merchants diversified into selling other lines;  tin plates and the metal ‘glasses’ used for drinking water, thermos flasks and hats and prayer caps of every description.  Hats were Hussain’s ‘thing’ and he rarely came back from a shopping spree without a new addition to his collection.  As well as the local, round white caps he was the proud owner of a karakul or astrakhan, a flat, woollen Chitrali hat known as a pakol and a selection of prayer hats, plain white or crocheted in gold and silver Lurex. He had to commission the carpenter to make a hat stand.

As well as fruit, vegetable and meat shops, others sold second hand Russian cameras. Pistols were to be found in one general goods store while bullets were on display in another.  One day our shopping list included explosives and fuses (for blasting through rock for the well at the site of the new clinic) and I was astonished that one could simply ask for such items without an eyebrow being raised. I was extremely nervous on our return journey that day, convinced that the bouncing of the jeep would set of an almighty explosion. Hussain said that at one time even hand grenades and mines were openly sold until the Parties, becoming alarmed at the number of family feuds being settled in such a bloody way, banned them.

Rickety wooden ladders, often with rungs missing, led to the second storey businesses. Here the tailors squatted all day behind their ancient, hand operated sewing machines, turning out clothes – mainly for men as women usually made their own at home – and waistcoats without which the well- dressed men of Jaghoray would not be seen. Small lanes running off the main street led to bakery shops which produced a fragrant array of buns and biscuits, carpentry shops and silversmiths.  Here antique silver coins and beautiful old jewellery, no longer considered fashionable, were turned into modern rings and bangles. 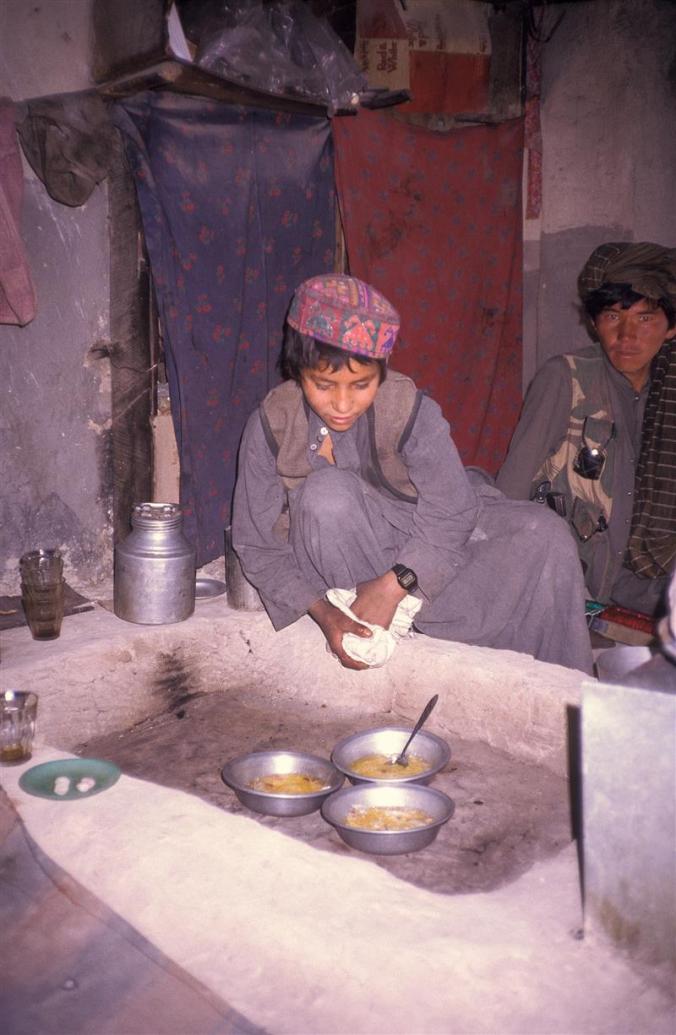 At each shop I patronised a crowd would gather, the people closest to me relaying information regarding my purchases back to those unfortunates too far away to actually witness the entertainment live.

‘Now she is buying soap. She’s to buy Dove soap. No, no, she’s changed her mind; it’s Camay. She bought the Camay.’

‘Foreigners don’t use water, you know, they use paper.  Disgusting isn’t it?’

Hussain would snarl at them from time to time but within moments the scattered spectators, first the small boys then the slightly more sheepish men, would re-group and fall in behind us once more. 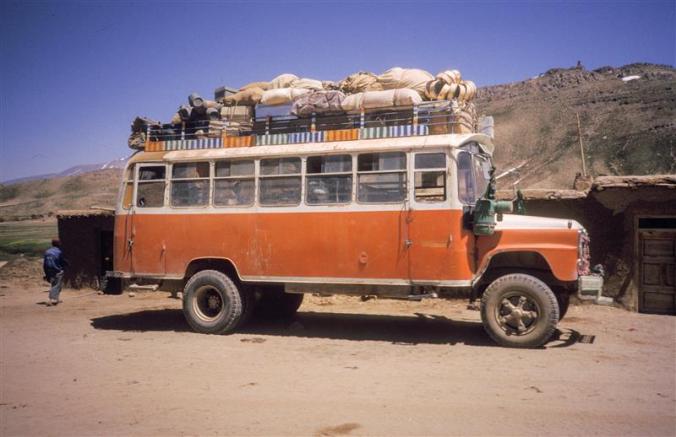 This is the kind of bus on which I spent three days getting to Afghanistan.

An outing to the bazaar often ended with a visit to the field hospital so I could see Rosanna, who was still teaching the medical course to the translators/paramedics. Hussain did not care for Rosanna – she was a grown up dictator, and frightened the life out of him – but I welcomed the opportunity to be in the company of another woman. A tentative friendship with Baqul’s wife Fatima was beginning but we could not hope to talk easily until my Dari improved.