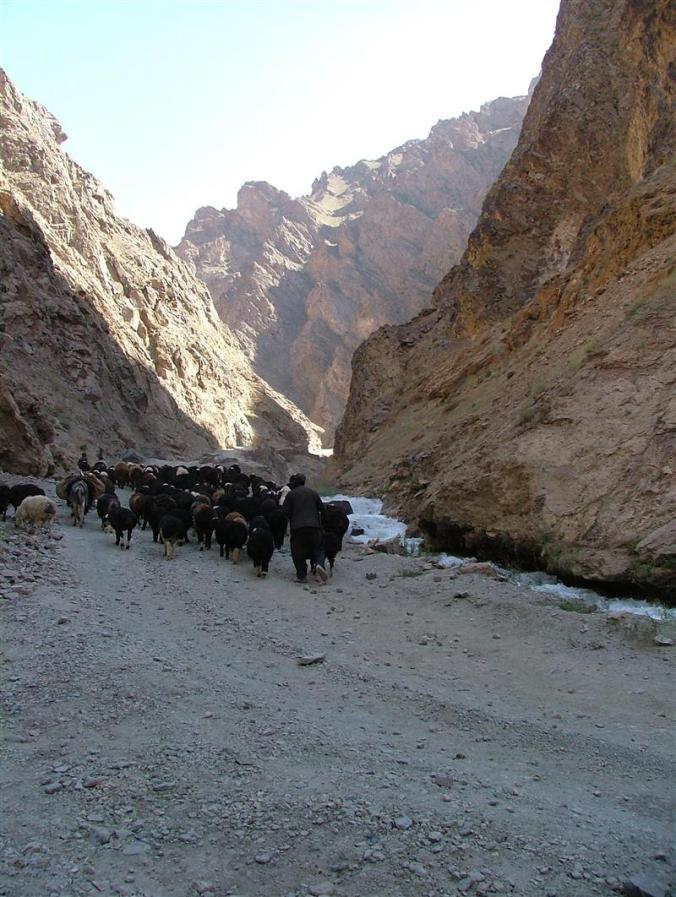 The additional weight of our armed guards made the bus even slower. I felt I could walk faster. Eventually, I dozed. The bus juddering to a stop jolted me awake. From outside I could hear yelling – it didn’t sound friendly. I peered through the window, spotting the tail end of a jeep blocking the road. Convinced we’d been ambushed, I turned to seek advice and comfort from Hussain only to discover he’d disappeared.

Before total panic paralysed me I heard his voice calling from the back of the bus, ‘Oh, Mudder, beroon beyee.’ (‘Oh, Mother, come outside.’) As I started to climb over the seat in front, thumping an unfortunate woman round the head with my bag, he called again, telling me to head for the back of the bus.

Changing direction, stumbling and staggering over bundles, tripping over shins and trampling on feet, I fought the terribly British urge to apologise to everyone I inadvertently assaulted in my scramble to the rear door. I paused. There were no steps. My exit became even less dignified as I launched myself into the arms of Moh’dullah, who deposited me swiftly on the ground. Hussain was by now beside himself with impatience. ‘Zoot!  Zoot!’ he ordered. (‘Quickly! Quickly!)

‘Chi shud?’ I stammered. (‘What’s happened?’) Without wasting time on further speech Hussain pulled me towards the back of the jeep, telling me to climb in and sit down. Surrounded by half a dozen grim faced mujahideen, bristling with Kalashnikovs, I sat, petrified. Hussain had vanished again, as had Moh’dullah. Were we all being kidnapped – or just me?  One of the men asked his neighbour, ‘Dari mefahmad?’   (‘Does she understand Dari?’)  They knew I was a foreigner. I knew this stupid disguise wouldn’t fool anyone. It was a kidnapping.

Hussain and Moh’dullah staggered over and crammed our baggage and themselves into the jeep. Immediately the driver sped off. Hussain turned to me, huge, happy grin lighting up his face, ‘Now we are safe. These people are our friends. They are taking us to Jaghoray, to Sangi Masha bazaar.’ For the first time in my life, I truly understood the cliché as relief flooded through me.

‘How did they know we were on the bus?’

‘They stopped the bus to collect money – a sort of road tax to provide security against bandits. Moh’dullah told them about you and they offered to take us to the bazaar.’  Grinning again, he added, ‘You can lift your veil now.’

Suddenly feeling ridiculously shy about uncovering my face in front of so many men, I reluctantly raised the veil to find all the mujahideen were staring fixedly at some point six inches above my head. Cool, fresh air blew on my face. I turned to smile at Hussain who remarked, ‘You’ve got dry skin hanging from your lips. It looks disgusting.’

It was dark when we reached the bazaar of Sangi Masha and, although the village was only another hour away, the driver would go no further. ‘They’re afraid Hisb-i-Islami might fire on them from the mountain,’ explained Hussain. I wasn’t going to argue with what seemed to me an eminently sensible reason for halting our journey. Hussain and I were ushered into a room above someone’s shop. I could barely stay awake long enough to drink the tea someone brought. The moment I stretched out on a mattress on the floor I was asleep.

It was already bright and sunny when I awoke the next morning to find Hussain pacing the floor. Tea and fresh nan had been brought to the room. He’d already organised a jeep to take us to Sangsuragh. ‘The driver is waiting,’ he said pointedly and I swallowed my tea, shoved the hated burqa, which I vowed never to wear again, into a bag and wrapped myself instead in a lightweight chaddar, which hid my hair but left my face uncovered.

The driver roared off through the bazaar.  My first impression was of being in the middle of a set depicting the trading post in a Wild West film. The long, straight, dusty road was congested with heavily laden donkeys which skittered in alarm as our jeep careered recklessly through them. Outside the small shops ran a narrow raised pavement but the horses, which should have been fastened to a hitching rail, had been replaced by Russian jeeps, and instead of six shooters citizens toted Kalashnikovs.

Leaving the bazaar, passing the shell of a rusting Russian armoured personnel carrier, the jeep bounced along the worst road I had ever experienced.  Huge boulders lay all around, interspersed with deep potholes and the occasional irrigation channel which ran across the road to the fields. The painful hammering my body was taking was, however, more than compensated by the spectacular scenery.

Great rocky, jagged peaked mountains soared skywards, small cultivated fields of wheat gleamed like gold behind hedges interwoven with tiny, white and pink wild roses. Enormous clumps of wild lavender growing on the rocky ground at the foot of the mountains added their perfume to air already scented by roses and sunshine and clover. As we drove past a large graveyard where stones leaning at crazy angles marked the resting places of past inhabitants of the village the driver slowed. He and Hussain indulged in a moment or two of somewhat theatrical “tss, tss, tss”, accompanied by much sorrowful head shaking. I thought perhaps someone close to them had recently been buried but learned, later, this was the usual performance of Jaghoray people when passing any graveyard. The cassette of love songs or dance music which was invariably played at full blast would be silenced the moment a graveyard was approached. The occupants of the vehicle would raise their hands, palm upwards in prayer – especially alarming when the driver removed both hands from the wheel.

A sharp incline brought us to the village of Sangsuragh.

Hussain on the pass between Jaghoray where his clinic would be and Malestan where a clinic was already established.

42 thoughts on “MarySmith’sPlace – Travels in #Afghanistan (4)”