As some of you already know I spent a number of years in Afghanistan and have written extensively about my experiences in both prose and poetry. No More Mulberries is a novel set there and Drunk Chickens and Burnt Macaroni is a memoir based on the final three years I spent in Afghanistan.

I have come across the diaries I kept and bits of writing I’d started so this and future posts is by way of a prequel to Drunk Chickens. It begins back in 1986 when I first crossed the border from Pakistan to Afghanistan.

It felt like I had been asleep for only minutes when an insistent hand on my shoulder shook me awake. Hussain was discernible only as a dark shape, denser than the surrounding blackness. There was urgency in the whisper that accompanied the shaking, ‘Time to go. The bus is leaving. Be quick – and don’t talk.’

Rummaging under the blanket I retrieved my burqa, a tortuous garment that Robert Byron, in Road to Oxiana described succinctly as “a beehive with a slit on top.”  Still befuddled with sleep I tried to pull it into place, Hussain’s impatient sighs making me fumble more than usual. Now was clearly not the time to mention he’d told me we’d be leaving at six o’clock, not three. Snatching my travel bag and an armful of bedding he hurried out, leaving me to stumble along behind him in the dark.

We were catching a bus to Afghanistan – from a place called Chirman, somewhere on the Pakistan/Afghanistan border. Hussain muttered something about Moh’dullah, our travelling companion, having reserved “one whole seat” for me in the ladies’ section. I was still pondering the implications of one whole seat – were half seats for children or perhaps for really small people? – when we came within sight and sound of the bus. An ancient, dilapidated vehicle, which couldn’t possibly take us more than fifty yards, was surrounded by a very vocal mob rioting outside the front door. Staring stupidly at the seething mass, my footsteps slowed – I’d seen buses set ablaze by more restrained crowds in Karachi. With a helpful shove Hussain propelled me into the midst of the mob, which instantly closed around me, preventing any escape other than by moving forward. Seizing the handrail I began to haul myself up the steps. The weight of bodies pressing from behind sent me sprawling in an ungainly heap across the laps of several women already seated.

From somewhere towards the back of the bus Hussain’s voice called out in Dari, ‘Oh, mudder, inja beyee.’ (‘Oh, mother, come here.’) Where? I peered in the direction of the voice but as usual the burqa’s net visor had slipped round my left ear and I could see nothing. With ferocious determination I gracelessly clambered over several women, trampling a great many children underfoot until I reached my “son” – and my one whole seat.

I was still trying to pull my veil straight when a large woman clutching a small child and an enormous basket forcibly jammed me against the window. It was a remarkable manoeuvre for I had sincerely believed the seat to be barely big enough for me – now we were three. When Hussain noticed the problem he took immediate action, haranguing the woman who, with admirable aplomb, totally ignored him. He next turned his wrath on the woman’s husband who yelled back vociferously, as did various observers and the driver, all clearly on the side of the trespasser. Finally Moh’dullah entered the fray demanding to know why the driver had sold half of my seat twice when he knew the whole seat had already been paid for. The driver looked sheepish as everyone began to shout at him, the woman was evicted and squashed elsewhere and I sat, cringing with embarrassment, for once grateful for the burqa hiding my blushes.

Two hours later, during which time the engine had kept up a headache-inducing thrumming, the last of the passengers squeezed in. With a terrific yelling of ‘Y’Allah’ and ‘Bismillah’ the bus shuddered into action. I sneaked a look behind to check where Hussain was sitting. With the exception of the four benches for women at the front, most of the seating had been removed to allow the entire rear portion of the bus to be loaded with sacks of sugar and salt. On top of these, surrounded by their personal belongings, sprawled the men, in considerably more comfort than the women herded together in front. The narrow bench seats, apparently designed for pygmies, contained ten women, their children and a great many bags and baskets. Hussain winked encouragingly at me.

As the sky brightened I peered through the grimy piece of windowpane, anxious for my first glimpse of Afghanistan – foolishly surprised that the scenery was exactly as it had been in Pakistan. The road was a dirt track through a desert wasteland. In the distance a line of mountains, barren and bleak, broke the skyline. An occasional herd of donkeys looked up curiously before continuing to graze amongst the few straggly shrubs in the desert. 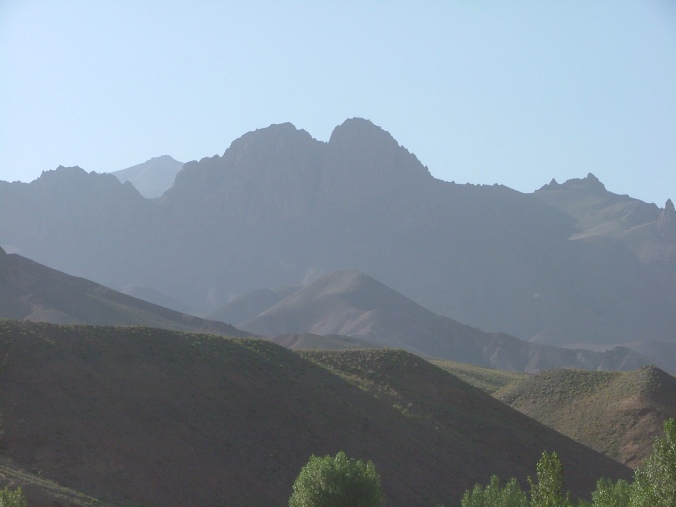 Being the only woman wearing a burqa made me the object of curiosity. As I was soon to discover, very few Hazara women ever do wear it, preferring to preserve their modesty with the chaddar – a large piece of printed fabric about the size of a bed sheet draped around the head and shoulders. With a judicious flick, born of long practise, a woman can conceal her face just as effectively as with a burqa. A single eye peeps out from within the folds so she resembles some sort of benign cyclops gazing at the world. In the privacy of the bus, ignored by the men behind them, none of the women bothered even to cover their faces.

It was obviously considered strange I was not joining in as the women shared out bread and fruit, keeping up a continuous flow of chatter. An attempt was made to break the ice with the offer of a banana at which point Hussain, sitting immediately behind me, intervened explaining I was very ill and they shouldn’t disturb me as I needed to sleep. I squirmed beneath the burqa, ashamed of the deception while one woman stared hard at me. Finally, she nodded, nudging her neighbour and shaking her head as she made some remark I didn’t follow. Later, Hussain whispered, ‘She said it’s true you’re very sick because she can see you are wearing eye glasses.’

Unable, despite wearing my eyeglasses, to see much of the passing scenery, forbidden to talk, read – or smoke a much-needed cigarette – I dutifully closed my eyes. Sleep would have been welcome but every jolt of the bus slammed my knees hard against the wooden seat back in front of me and bounced my head off the window. Inwardly I swore at Moh’dullah and his insistence on my ridiculous disguise – and at my own spinelessness at accepting his strictures. A journey, which would have been uncomfortable but nevertheless fascinating and exciting, had I been able to join in and talk openly with the women, was turning into some kind of grim endurance test.

24 thoughts on “MarySmith’sPlace – Travels in Afghanistan”