One of my favourite walks, especially when I don’t have much time is round by Threave Castle, built on an island on the River Dee near Castle Douglas by Sir Archibald Douglas in 1369. Known as Archibald the Grim because of his fierceness in battle he was Lord of Galloway and one of the most powerful men in southern Scotland.

I always think of this route as 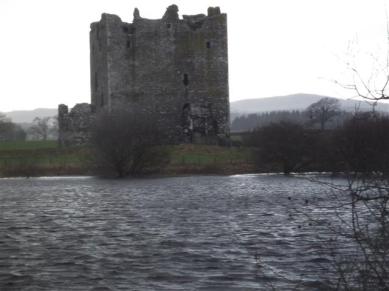 the osprey walk because it features an osprey viewing platform from which visitors can watch our pair of the ospreys on their nest across the river. That’s a post for later in the year when the parents – I hope – return to their nest.

Sometimes, I walk out from town, along the old railway line, which adds another forty minutes to the walk. On the days I don’t have much time but really need to walk I drive to the car park and do a quick circular route. Well, it’s quick if I don’t chat with the people I meet or spend too long gazing at the roe deer.

Everyone loves the excitement of the short boat trip to the island and the castle.

The walk is only about 2.5 kilometres, though it can be extended by visiting the bird hide on Lamb Island. In fact there are several hides so binoculars are a good idea for bird watching. There is always plenty to see whatever the season. A heron is usually to be seen fishing and peregrine falcons have commandeered the top of the castle in recent years. The jackdaws which share the castle accommodation seem unconcerned when one of their numbers suddenly disappears to provide lunch for the peregrines.

The roe deer are watchful but they know I’m too far away to be a threat.

Migratory geese including pink-footed geese are often to be seen. Dozens of whooper swans arrived on the river the other day – the day I hadn’t brought my camera.

The route is round well-marked pathways along the riverside (one short stretch is very wet and muddy), through woodland and beside farmland.

At a point where the path forks, there is a sign pointing the way to the castle, and here a robin has claimed the territory as his. He flutters onto the fence post and would like everyone to pay a toll of seeds as they pass by.

This cheeky chap is one of several robins which have staked out their territories at various places around the walk.

28 thoughts on “Just a short walk”